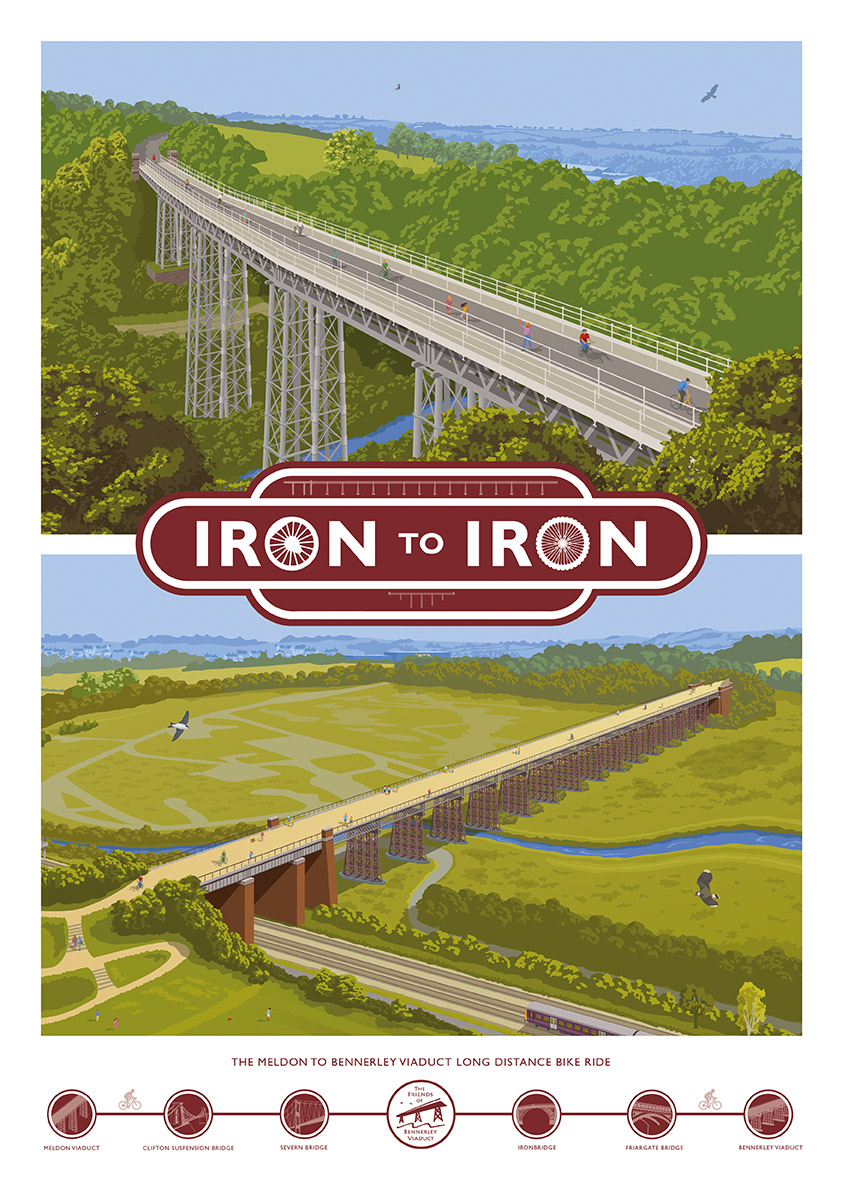 The Friends of Bennerley Viaduct (FoBV) are to launch an exciting new cycling route which will link the two remaining wrought iron viaducts in the country. The 300 mile “Iron to Iron” bike challenge will connect the Meldon Viaduct in Devon with Bennerley Viaduct in Nottinghamshire / Derbyshire and will take in other iconic bridges including the Clifton Suspension Bridge, Severn Bridge, Ironbridge and  Friargate Bridge. The creation of the new heritage cycling route is a key strand in the FoBV’s cultural heritage programme which is supported by the World Monument Fund and American Express.

Seventeen intrepid riders will depart from the Meldon Viaduct on Tuesday 14th September arriving at Bennerley Viaduct on Sunday 19th September. The challenging ride is over 300 miles long and includes 15,000 feet of climbing including the impressive Cheddar Gorge. Most of the riders are local to Bennerley Viaduct but others have joined from Essex, Norfolk and York.

Kieran Lee, Community Engagement Officer from the Friends of Bennerley Viaduct said “the Meldon Viaduct is already used by cyclists and is a highlight of the popular Granite way. Later this year, Bennerley Viaduct will start its new life as a walking and cycling trail after over 50 years of closure. The Iron to iron trail will create a fantastic new cycling route taking in some of the nation’s iconic bridges, wild landscapes, forests, picturesque villages and many other hidden gems. The new route will help bring our rich industrial heritage to a much wider audience and establish Bennerley Viaduct on the national cycling map.”

“As a keen road cyclist, I’m delighted to join the ‘peloton’ as part of Bennerley Viaduct’s Iron to Iron celebration as the team spin their way across the country. Bennerley is the perfect global model for the reinvention of disused railway routes into trails for walking, cycling, and to strengthen social ties and well-being. Heritage that improves your health in more ways than one! Bennerley joins an international family of World Monuments Watch sites that range from the Taj Mahal to Machu Picchu, but has added its own distinctive twist through the creativity of its enthusiastic supporters.”

The local award-winning radio station Erewash Sound will be keeping listeners abreast of events on the road with daily broadcasts reporting on the progress of the ride. They will be accompanying the ride telling the stories of the riders, the places they visit, the people they meet en route, the highs and the lows. The station also hope to share content produced on the ride to educational institutes, as well as other broadcasters.  Lewis Allsopp, director, presenter and producer at Erewash Sound said:

“It’s an honour to be covering this inaugural ride, and Erewash Sound is excited to be able to showcase the stories behind some of the bridges and other features of the heritage ride – finishing up at Bennerley Viaduct, which is truly one of the jewels in the crown of our broadcast area. We’re looking forward to getting on the road with the riders, and sharing their stories with our listeners.”

In addition to trailblazing the new ride, the riders will be raising funds to further the work of the Friends of Bennerley Viaduct and to supply clean water to 42 homes in an earthquake damaged Nepalese village. Donations can be made through the following links.